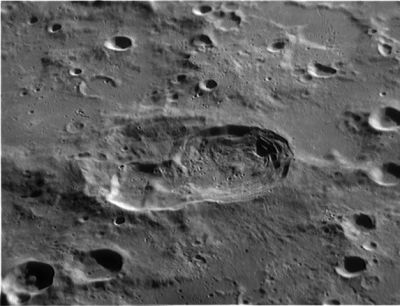 (IAU Directions) HAINZEL.--This remarkable formation, which is about 55 miles in greatest length, but is hardly half so broad, derives its abnormal shape from the partial coalescence of two nearly equal ring-plains, the walls of both being very lofty,--more than 10,000 feet. It ought to be observed under a morning sun when the floor is about half illuminated. At this phase the extension of the broad bright terraced W. border across a portion of the interior is very apparent, and the true structural character of the formation clearly revealed. The floor abounds in detail, among which, on the S., are some large craters and a bright longitudinal ridge. Hainzel is flanked on the E. and S.E. by a broad plateau, E. of which stand two ring-plains about 15 miles in diameter, both having prominent central mountains and bright interiors.

The strange unnamed chain of depressions north-northeast of Hainzel

Paul Hainzel (1527–1581) was a German astronomer. In 1569, Paul Hainzel and his brother Johannes Baptista Hainzel helped their friend Tycho Brahe design and construct a large quadrant.