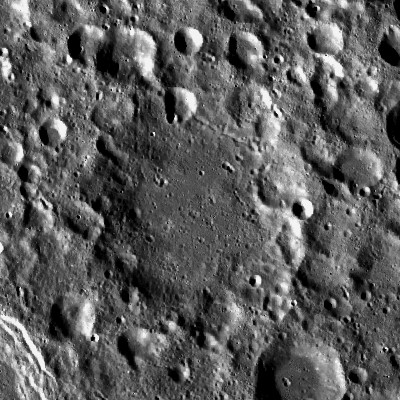 LPOD Photo Gallery Lunar Orbiter Images Apollo Images (see H.G. Wells)
Part of H.G.Wells was captured in Apollo 16's Fairchild-camera photograph AS16-M-3000 which was made during Trans Earth Coast (TEC). In this photograph, H.G.Wells is noticeable in the frame's lower right corner, with the shadowed interior of Tesla slightly leftward of it.
Research: Danny Caes

H.G.Wells is mentioned in the article Changes on the Moon's Surface (Nature, 1902), because of the many reports of William H. Pickering, the dedicated telescopic observer of the moon and his curious claims (observations of so-called changes on the moon's surface) which could have inspired H.G.Wells, who wrote fantastic stories such as The First Men In The Moon, see also page 255 in W.P.Sheehan's and T.A.Dobbins's Epic Moon; a history of lunar exploration in the age of the telescope.