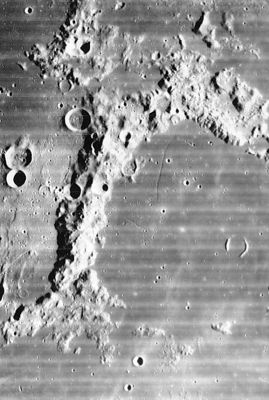 IAU Directions On the E. (of Otto Struve) is the much more regular and almost as large formation, Otto Struve A, the E. border of Otto Struve forming its W. wall. This enclosure is bounded elsewhere by a very low, broken, and attenuated barrier. At sunrise the W. and E. walls, with the mountain mass at the N. end, which they join, resemble a pair of partially-opened calipers. There is one conspicuous little crater on the E. side of the floor; and, at or near full moon, four or five white spots, nearly central, are prominently visible.