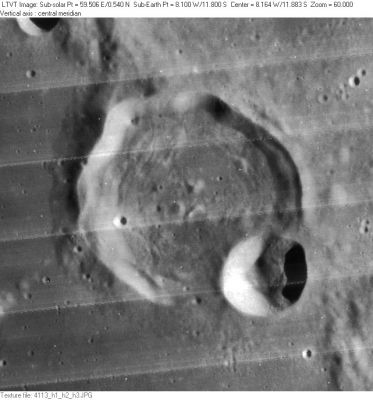 LO-IV-113H The 15-km diameter crater straddling Davy’s southeast rim is Davy A. A part of 7-km Davy B can be seen in the upper left. The ridge that runs towards it is a small part of the rim of 70-km diameter Davy Y, the lettered crater containing the famous Catena Davy. The little grouping of craters in the upper right (which fall on the floor of Davy Y) are regarded as part of that Catena Davy, although they are not well aligned with the others.

(IAU Directions) DAVY.--A deep irregular ring-plain, 23 miles across, on the Mare W. of Alphonsus. There is a deep crater with a bright rim on its S.E. wall, and W. of this a notable gap. There is also a wide opening on the N. The W. wall is of the linear type. A cleft crosses the interior.