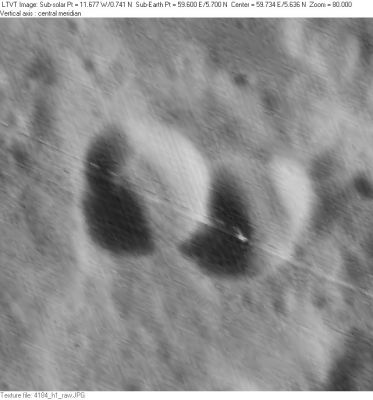 LO-IV-184H Daly is the left-most of this pair of craters to the northwest of Apollonius. The 16-km diameter crater on the right, which it overlies, is Apollonius F.

LPOD Photo Gallery Lunar Orbiter Images Apollo Images
- Daly was captured on Apollo 17's panoramic ITEK-camera frames AS17-P-2923 and AS17-P-2928. To detect Daly on these frames, one should scroll all the way toward the right margins (of both frames). Daly is the pronounced crater with the dark "lake" to the right (for Daly's "lake"; see Additional Information below).
- Research: Danny Caes