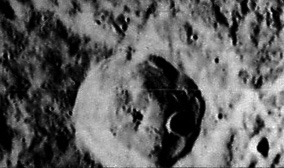 (IAU Directions) BIANCHINI.--A fine ring-plain, about 18 miles in diameter, on the N.W. side of the Sinus Iridum, surrounded by the lofty mountains defining the border of the bay. Its walls, which are prominently terraced within, rise about 7,000 feet on the W., and about 8,000 feet on the E. above the floor, which includes a prominent ridge and a conspicuous central mountain. There is a distinct crater on the S. wall, not shown in the maps. Between this side of the formation and the bay is a number of hills running parallel to the shore-line: these, with the intervening valleys, will repay examination at sunrise.