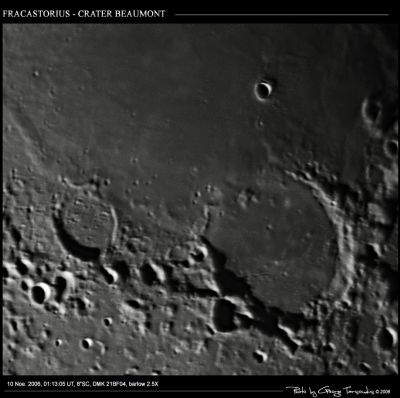 (IAU Directions) BEAUMONT.--A ring-plain about 30 miles in diameter, on the S.W. side of the Mare Nectaris, midway between Theophilus and Fracastorius, with the N.W. side of which it is connected by a chain of large depressions. Its border is lofty, regular, and continuous on the S. and W., but on the E. it is low, and on the N. sinks to such a very inconsiderable height that it is often scarcely traceable. It exhibits two breaks on the S.E., through one of which passes a coarse valley that ultimately runs on the W. side of the depressions just referred to. The interior is pitted with many craters, one on the E. side being shallow but of considerable size. I once counted twenty with a 4 inch Cooke achromatic, and Dr. Sheldon of Macclesfield subsequently noted many more. A ridge, prominent under oblique light, follows a winding course from the N.E. side of Beaumont to the E. side of Theophilus, and there is another lower ridge W. of it. Between them is included a region covered with minute hillocks and asperities. Among these objects are certain dusky little crater-cones, which Dr. Klein of Cologne regards as true analogues of some terrestrial volcanoes. They are very similar in character to those, already alluded to, in the dusky area between Copernicus and Gambart.