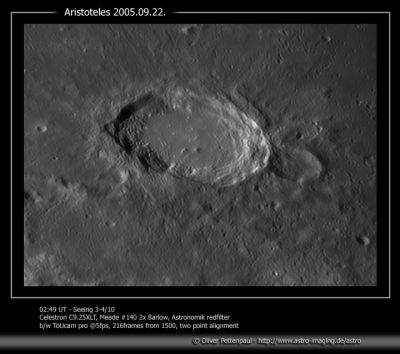 Oliver Pettenpaul Aristoteles is the large crater. The small one it overlays on the right is Mitchell.

(IAU Directions) ARISTOTELES.--A magnificent ring-plain, 60 miles in diameter, with a complex border, surmounted by peaks, rising to nearly 11,000 feet above the floor, one of which on the E., pertaining to a terrace, stands out as a brilliant spot in the midst of shadow when the interior is filled with shadow. The formation presents its most striking aspect at sunrise, when the shadow of the E. wall just covers the floor, and the brilliant inner slope of the W. wall with the little crater on its crest is fully illuminated. At this phase the details of the terraces are seen to the best advantage. The arrangement of the parallel ridges and rows of hills on the N.W. and S.E. is likewise better seen at this time than under an evening sun. A bright and deep ring-plain, about 10 miles in diameter, with a distinct central mountain, is connected with the E. wall.

A Table of Contents Alexander's Teacher Frigid Buddies: Aristoteles and Eudoxus Twins Not Younger or Older Eating a Smaller Fry