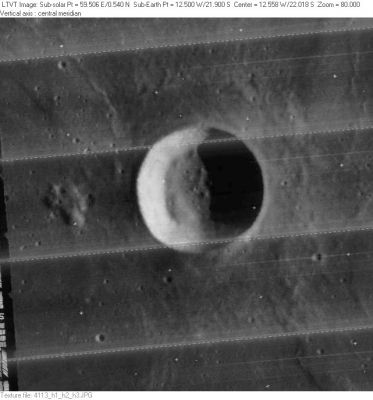 LO-IV-113H
Nicollet and the hillock Nicollet Epsilon immediately westward of it, which is an interesting guide to recognize crater Nicollet, especially while observing the moon through telescope.- DannyCaes Nov 2, 2013

LPOD Photo Gallery Lunar Orbiter Images Apollo Images
- Although it (the name Nicollet) is not mentioned in the LPI's search-list of orbital Apollo photographs, it (crater Nicollet) WAS photographed during the mission of Apollo 16 in april 1972. Nicollet is visible slightly "above" (north of) the lowest and most central part of the curved horizon in Apollo 16's oblique south-looking metric/mapping Fairchild-camera photograph AS16-M-2485 (zoom-able HiRes scan of the ASU's Apollo Image Archive).
- A dark spot or low-albedo hillock such as Mons Moro is located near the ridge Nicollet Psi. This low-albedo hillock was captured on Lunar Orbiter 4's photograph LOIV-113-h2 (near the frame's lower left corner).
Research Apollo 16 and Lunar Orbiter 4 photography: Danny Caes

(IAU Directions) NICOLLET.--A conspicuous little ring-plain on the W. of Birt, and somewhat smaller. Between the two is a still smaller crater, from near which runs a low mountain range, nearly parallel to The Straight Wall, to the region S.W. of the Stag's Horn Mountains. Here will be found three small light-surrounded craters arranged in a triangle, with a somewhat larger crater in the middle. 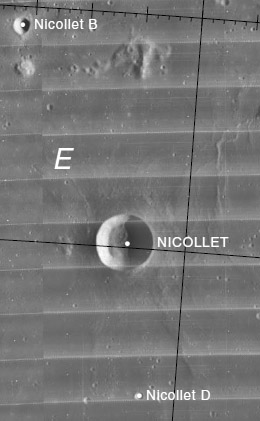