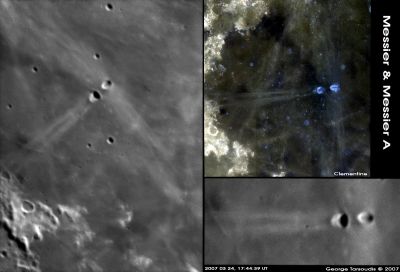 George Tarsoudis Messier is the right-most member of the crater pair shown in these images. Its slightly larger-appearing companion on the left is Messier A.

(IAU Directions) MESSIER.--The more easterly of a remarkable pair of bright craters, about 9 miles in diameter, standing in an isolated position in the Mare Fecunditatis just S. of the Equator. Madler represents them as similar in every respect, but Webb, observing them in 1855 and 1856 with a 3 7/10 achromatic, found them very distinctly different,--Messier, the more easterly, being not only clearly smaller than its companion, but longer from E. to W. than from N. to S., as it undoubtedly is at the present time. Messier A, however, as the companion is termed, though larger, is certainly not circular, as sometimes shown, but triangular with curved sides. It is just possible that change may have occurred here, for Madler carefully observed these objects more than three hundred times, and, it may be presumed, under very different phases. Messier A is the origin of two slightly divergent light streaks, resembling a comet's tail, which extend over the Mare towards its W. border N. of Lubbock, and are crossed obliquely by a narrower streak. Messier and Messier A stand near the S. and narrowest end of a tapering curved light area. There is a number of craterlets and minute pits in the neighbourhood, and under a high light two round dusky spots are traceable in connection with the "comet" marking, one just beyond its northern, and the other beyond its southern border, near its W. extremity.