TWO LUNATIONS ON ONE GLOBE 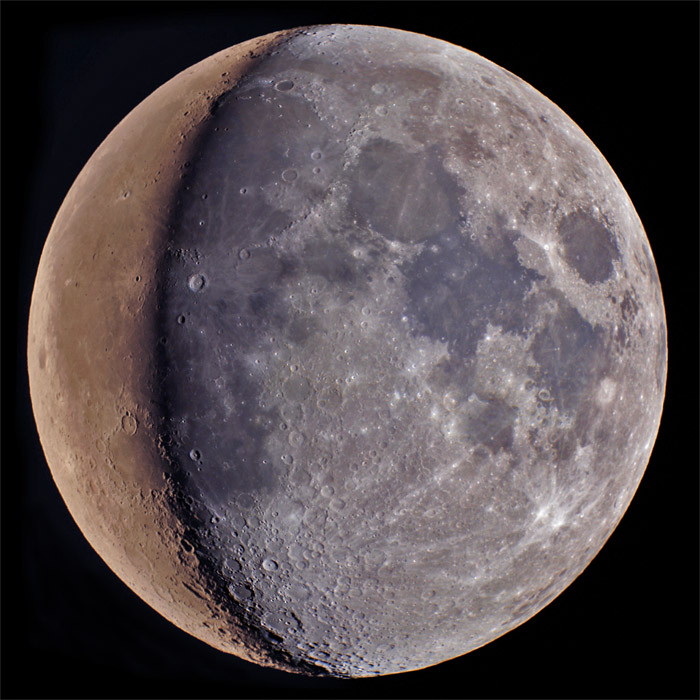 Since Jupiter has become a low temperature brown dwarf star, light from two suns radiates across the solar system. Thus, Earth, Moon and other planetary bodies have two sources of illumination. On this image of the Moon the white illumination is light directly from Sun I. The fainter, rose-hued illumination on the left side is from Sun II, formerly called Jupiter. In rare cases such as this where the two suns are on opposite sides of the Moon, the two terminators line up, and the Moon is totally illuminated except for a narrow belt of darkness. Because of Sun II's great distance and relative faintness, the hemisphere it illuminates is less bright and at a lower temperature. This had an interesting consequence, because one of NASA's main reasons for previously considering a polar base was continuous power, but now, post-Jupiter, solar panels typically can collect energy anywhere on the lunar surface for much longer than half each month. Of course, the impact of not having night had most severe effects on life on Earth. Although disorientation of many animals by the lack of darkness was serious, the greatest threat was to plants whose photosynthesis processes were disrupted by the lack of nighttime cooling. Unfortunately, after the great die-off, only computers remained to appreciate the many new phases of the Moon, and the archive of human knowledge went unused by their species.