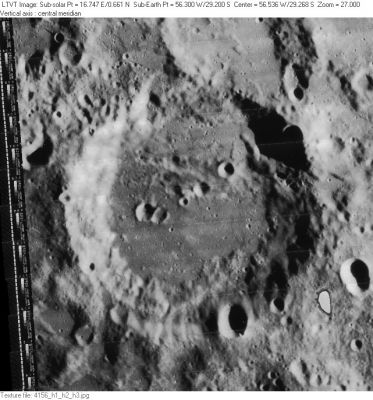 (IAU Directions) VIETA.--One of the finest objects in the third quadrant; a ring-plain 51 miles in diameter, with broad lofty walls, a peak on the east rising to nearly 11,000 feet, and another N. of it to considerably more than 14,000 feet above the interior. It is bounded by a linear border, approximating very closely to an hexagonal shape, which is broken by many gaps and cross-valleys. On the S., the S.E. and S.W. sections of the wall do not meet, being separated by a wide valley flanked on the E. by a fine crater, which has broken down the rampart at this place. The N. border is likewise intersected by valleys and by a crater-row. The inner slopes are conspicuously terraced. There is a very inconspicuous central mountain and several large craters on the floor, some of them double. Ten have been counted on the N. half of the interior. On the S.W. of Vieta are two fine overlapping ring-plains, with a crater on the wall common to both.