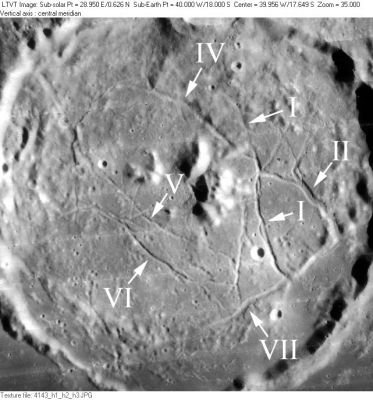 LO-IV-143H The current IAU name refers to the complex rille system of the floor-fractured crater Gassendi. The Roman numerals are from the earlier IAU-approved System of Lunar Craters as shown on the accompanying Lunar Quadrant maps. Unfortunately the only readily available reproduction was insufficiently clear to identify the old Rima Gassendi III. It is most likely the north-south rille above the tip of the "VII" arrow. The image without the labels is also available. The SLC included two outlying Gassendi rilles (VIII and IX), far to the west near Gassendi F.