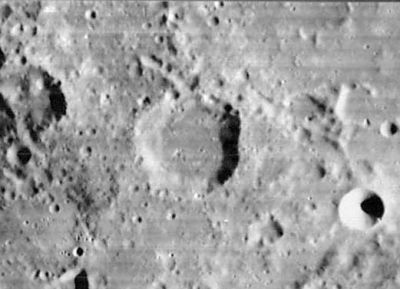 LPOD Photo Gallery Lunar Orbiter Images Apollo Images
- Although there's nothing in the LPI's search list for orbital Apollo photographs of Polybius, this crater WAS captured on several frames made by the southward looking mapping/metric Fairchild camera of Apollo 16, such as frame AS16-M-0693, which shows Polybius very near the central part of the depicted curved horizon, with the high-albedo bowl shaped crater Polybius A "below" (east of) Polybius itself. Note also the bright ray which runs through Polybius A.
- Research: Danny Caes

(IAU Directions) POLYBIUS.--A ring-plain, about 17 miles in diameter, in the hilly region S.W. of Fracastorius. The border is unbroken, except on the N., where it is interrupted by a group of depressions. There is a long valley on the S.E., at the bottom of which Schmidt shows a crater-chain.

Larrieu's Dam; the 'rediscovery' of a seldom explored topographical lunar feature in the foothills of the Rupes Altai, by Nigel Longshaw.
P.S.:
I did not knew about the appearance of my name (Danny Caes)(sans 's') in that article's last page! (it's because of my experimental Geocities website THE UNKNOWN MOON, which had the very first version of my ABC of Unofficial Lunar Nomenclature in it!). Thanks Nigel Longshaw! - DannyCaes Aug 3, 2015