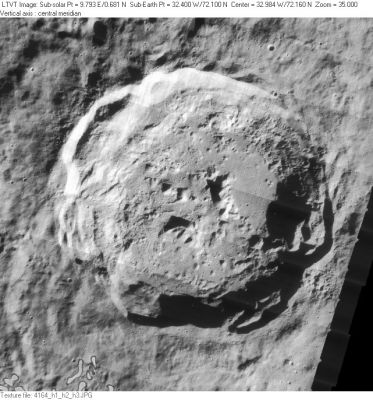 (IAU Directions) PHILOLAUS.--A ring-plain 46 miles in diameter, on the N.W. of Fontenelle. Its bright walls rise on the E. to a height of nearly 12,000 feet above the floor (on which there is a conspicuous central mountain), and exhibit many prominent terraces. Philolaus is partially encircled, at no great distance, by a curved ridge, on which will be found a number of small craters.


The crevasses on the floor of Philolaus

Philolaus is a crater which shows crevasses on its quite chaotic floor. In 2018, scientists discovered possible skylights in these crevasses.
See Bibliography below (the article from P. Lee).

- Philolaus of Croton; Greek mathematician, astronomer, philosopher (unkn-fl. 400 B.C.).
- Somewhere between Philolaus and the moon's limb (or: at the moon's limb) is a crater which was called Rhodes by Wilkins and Moore, but the I.A.U. did not accept that name.

Postcard from the Edge
Twin Peaks

The crevasses on the floor of Philolaus:
Lee, P. (2018) Possible Lava Tube Skylights Discovered Near The North Pole of the Moon - SETI Institute and Mars Institute on 11 January 2018.
"Rhodes":
THE MOON by H.P.Wilkins and P.Moore.