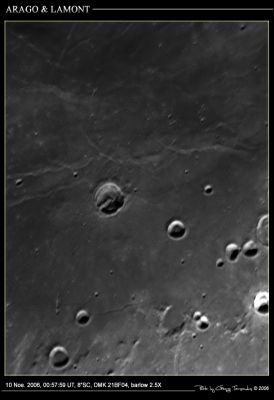 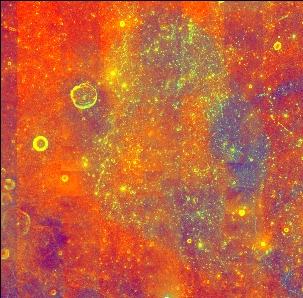 Left: George Tarsoudis (north to left): The prominent crater to the left of center is Arago. Lamont is above it.
Right: Clementine UV/VIS Ratio Map (north at top): Mercator projection dynamically created by USGS lunar Web Map Service. Click here for a USGS-generated list of all IAU-named features with centers in the current field.

Lamont is a peculiar concentration of concentric and radial ridges in southwestern Mare Tranquillitatis. The Clementine image shows one of its oddities. Although its center is red (in false color images) like most of Tranquillitatis, Lamont is circled by a blue lava well seen in the Apollo image mentioned above (note that these colors may be reversed from those in other Clementine ratio images). The ridges around Lamont are thought to mark the location of a buried ancient impact basin, about the size of Grimaldi, which reveals itself as an anomalous concentration of mass ("mascon") in gravity maps.