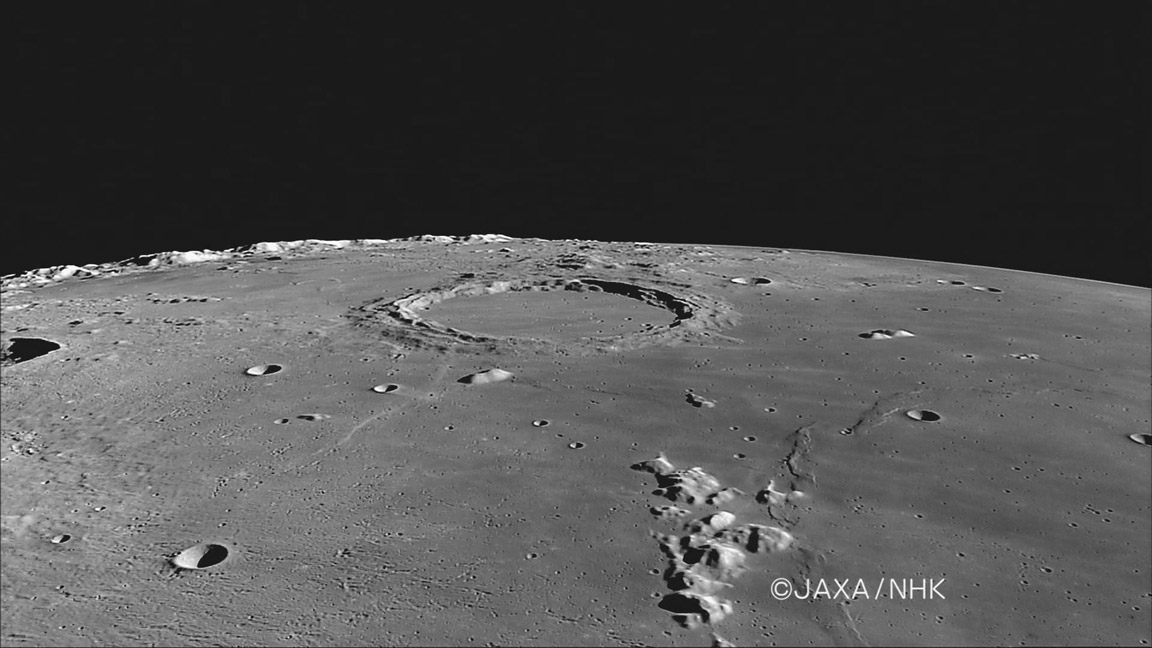 The HDTV on the Kaguya lunar orbiter was included for public outreach reasons but every oblique view frame I look at has scientific surprises too. This dramatic scene of Archimedes with the Apennines on the horizon is a spectacular shot that illustrates three interesting features of the Moon. First, large craters really are pretty flat. Archimedes is 83 km in diameter but only 2.1 km deep, so it is 40 times as wide as it is deep. Compare with Aristillus B, the 8.2 km wide crater at lower left that is 1.7 km deep, so its width is only 5 times its depth. Of course, Archimedes is shallowed by the lava that has covered it's original floor. A second intriguing feature is the relatively constant height of the Apennines. Over a horizontal distance of roughly 500 km the summits of the mountain chain are remarkably even. But perhaps this shouldn't be surprising for the rim of the Imbrium Basin, because the rim of a crater such as Archimedes is also relatively constant in elevation. A third observation concerns the rays from Aristillus that cross Mare Imbrium, especially to the west (right) of the Spitzbergen Mountains. The streaks of lighter hued material overlie darker, uncovered maria. What is eye-opening is how many more craters are on the rays compared to the dark zones. This is very obvious support for the estimates that vastly more secondary craters have been created by primary impacts than we previously thought. In fact, crater counters who want to get accurate ages probably should exclude areas within rays.

(1) Regarding the roughly uniform height of the Apennine peaks, I don't doubt that's an accurate assessment, but I suspect there must be a considerable element of perspective involved in exactly how they look in this view. To me, it appears to show a roughly 240 km long segment chopped off on the left just short of showing Mons Hadley Delta, and extending on the right to Mons Huygens (the low jumble of peaks on the horizon beyond Archimedes, with a lobster-claw of light reaching to its right). Mons Bradley, in the exact middle of the range (as seen here), is the only other named peak I can see (the identity of the peaks is probably much clearer in the HDTV movie -- wherever that may be). Guessing that the photo might have been taken from around 3.5°W/37°N (too bad they don't give that info!), the Mons Hadley Delta area would have been about 380 km away, Mons Bradley 460 km, and Mons Huygens 510 km away. The remainder of the Apennines, even though of similar height, seem to me to be curving out of sight over the horizon (maybe just the tops are visible?). Although in theory from Kaguya's nominal 100 km altitude one can see 19° or 575 km away, it looks like in practice it's hard to see more than 400-500 km (or maybe my guess of the spacecraft position is wrong). For example, one might expect to see the low Mare Imbrium crater Wallace (520 km distant) on the horizon in the direction beyond Bancroft (the prominent circular crater to the right of Archimedes), but I think the farthest things we are seeing in that direction are MacMillan (highly foreshortened at 400 km distance), and (to its left) the hills between it and Archimedes E. It looks to me like one would have to be considerably higher than Kaguya was to see the last bit of the Apennines running down to Eratosthenes (which should be off in that same direction, but completely out of sight in this view, being about 710 km away). Probably the remainder of the Apennines are visible in earlier or later frames of the video.

(2) I'll add my nonprofessional two cents worth. First of all--great photo! Images like this must be thrilling for lunar scientists and other professionals. Hats off to the Japanese!

Second, the view seems to be looking toward the southeast, with the sunlight coming from the west. (??) Was the photo taken during a waxing or waning Moon? Just curious.

Finally, people who think Moon photos are fake often cite the lack of stars in the sky as proof--as in this image. I believe the correct response is that we cannot see stars because the Sun is shining and it is daytime on the Moon. (??) I mention this because I'm scheduled to give another public talk about the Moon for our astronomy club next month. No one has asked about the "missing stars" at previous presentations, but I expect my luck will run out sooner or later and I will be grilled by a skeptic. I want to be prepared.

The image appears to be taken looking almost exactly due south with the Apennines to the south-east (left). As you note, the lighting is coming from the right (west), which, by definition, implies that the Moon was waning. The exact date (and possibly the time?) is probably given somewhere on the Kaguya website. The lighting appears similar to that in the full disk photo by amateur Michael Theusner taken on October 16, 2003. If you rotate Michael's image 180° and examine the area around Archimedes you will see lighting patterns on the faces of the Apennine peaks that can be fairly easily correlated with what is seen at a lower angle in the Kaguya view.

As to seeing stars from the Moon, the airless atmosphere means that in theory the sky is an inky black and stars can be seen day and night. In fact, the photographic packages on Apollo 15-17 included star-tracking cameras that took photos (looking out at the sky) simultaneous with the Metric and Panoramic Cameras (looking down at the Moon) to document the orientation in space. However, as a practical matter, because the stars are intrinsically faint, the glare from the Sun and the reflected light from the lunar surface makes them hard to see during the daytime. How easy it is for astronauts to see them during daytime from Earth orbit or from the Moon, I don't know. But the main reason they aren't visible in the Kaguya image is the limited dynamic range (and to a lesser extent the limited resolution) of the video system. A star puts far far fewer photons into a resolution element (pixel) than does a patch of sunlit lunar surface. When the exposure is right to show the lunar surface features, the feeble light from the stars is just too faint to make a splash. Whether the stars could be seen by increasing the exposure depends entirely on how much scattered light there is in the camera system.