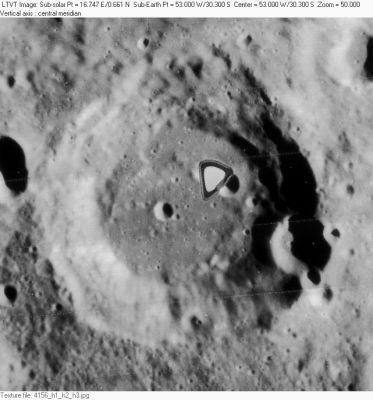 (IAU Directions) FOURIER.--A large ring-plain, 30 miles in diameter, S.E. of Vieta, with a border rising at a peak on the E. more than 9,000 feet above the floor, There are two craters on the outer slope of the N.E. wall, a prominent crater on the S. wall, and (according to Schmidt) a small central crater on the floor, which I have not seen. In the region between Fourier and Vieta there are three ring-plains, two (the more easterly) standing side by side, and on the E., towards the Mare, are two others much larger, that nearer to Fourier being traversed by one cleft, and the other by two clefts, crossing near the centre of the floor.

The illuminated cross near Fourier