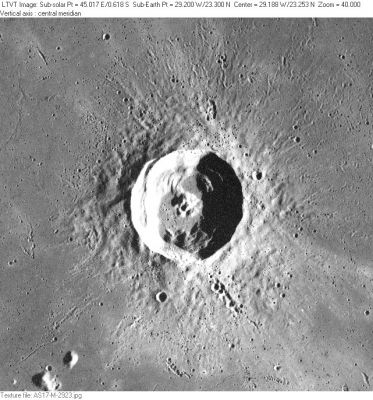 (IAU Directions) EULER.--The most westerly of the row of great ring-plains, which, beginning on the E. with Autolycus, and followed by Archimedes, Timocharis, and Lambert, extends almost in a great circle from the N.E. to the S.W. side of the Mare Imbrium. It is about 19 miles in diameter, and is surrounded by terraced walls, which, though of no great height above the Mare, rise 6,000 feet above the floor. There is a distinct little gap in the S. wall, easily glimpsed when it is close to the morning terminator, which probably represents a small crater. Euler has a bright central mountain, and is a centre of white silvery streaks.

Euler Gamma and its half-submerged craterlet: