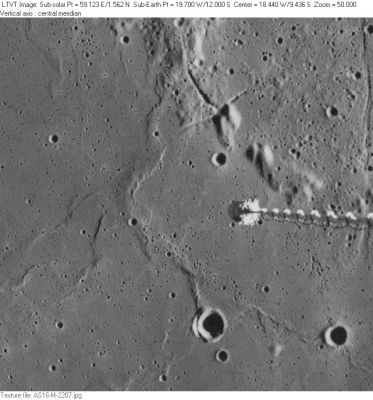 AS16-M-2207 This small area in the western part of Mare Cognitum contains a number of wrinkle ridges, only one of which has an official IAU name. The large crater visible in the upper right is Bonpland. The two prominent craters near the bottom are 6-km Bonpland D (left) and 4-km Bonpland C (right). Judging from the position and diameter listed in the IAU Planetary Gazetteer, Dorsum Guettard is the ridge running northwest from Bonpland C towards Bonpland D and the first part of the shadowed ridge extending northwest out of Bonpland D. In this photo, the latter ridge appears to continue north to a point where it blends into the glacis around Bonpland, but this continuation is well outside the range of the stated feature diameter. However, the original IAU approval was actually of the feature as labeled on LTO 76C1, and those labels included the northward extension as well as a short extension to the east of Bonpland C (going slightly outside the present frame). It is unclear which definition is current. Note: the spiral pole with the brush-like tip on the right is a boom on the Apollo 16 Command Module (from whose "SIM" bay this photo was taken).