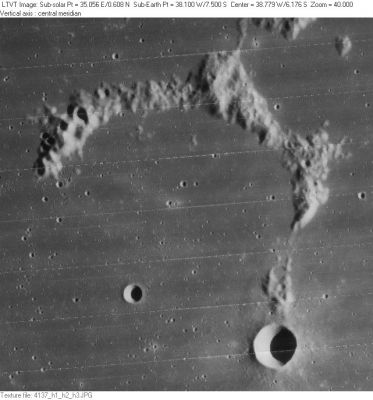 LO-IV-137H
Wichmann is the small circular bowl-shaped crater in the lower right.
The large arc of sunlit hills is regarded as the rim of 62-km Wichmann R, on whose floor is 4-km Wichmann B.
Note: on the large greenish colored Rand McNally moonmap, the arc Wichmann R is called Leon hills. These hills were once known as Wichmann Gamma, Wichmann Epsilon, and Wichmann Theta (see chart SLC E5) (System of Lunar Craters, 1966).

(IAU Directions) WICHMANN.--This bright crater, about 5 miles in diameter, stands on a light area in Oceanus Procellarum, N.N.E. of Letronne and nearly due W. of Euclides. Some distance on the N.W. are the relics of what appears once to have been a large enclosure, represented now by a few isolated mountains.