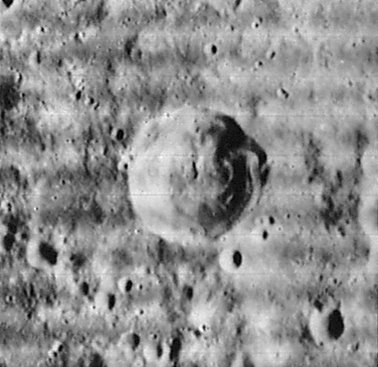 LPOD Photo Gallery Lunar Orbiter Images Apollo Images
- Tacitus was also captured on several frames made by the southward looking mapping/metric Fairchild camera of Apollo 16, such as in frame AS16-M-0697, which shows the pronounced crater Tacitus slightly "above" the centre of the line which connects the frame's centre and the centre of the frame's left margin.
- Research: Danny Caes.

(IAU Directions) TACITUS.--A bright ring-plain, about 28 miles in diameter, a few miles W. of Catherina, with a lofty wall rising both on the W. and E. to more than 11,000 feet above the floor. Its continuity is broken on the N. by a gap occupied by a depression, and there is a conspicuous crater below the crest on the S.E. The central mountain is connected with the N. wall by a ridge, recalling the same arrangement within Mädler. A range of lofty hills, an offshoot of the Altai range, extends from Tacitus towards Fermat.