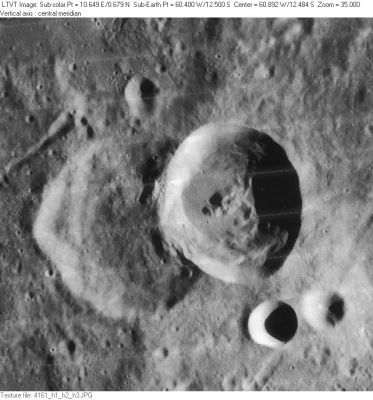 LO-IV-161H
Sirsalis is the crater with the central peak. The older 49-km crater to its left (to the west) is Sirsalis A (once called Bertaud by H.P.Wilkins and P.Moore).

(IAU Directions) SIRSALIS.--The more easterly of a conspicuous pair of ring-plains about 20 miles in diameter, in the disturbed mountain region some distance S.E. of Grimaldi. It has lofty bright walls, rising to a great height above a depressed floor, on which there is a prominent central mountain. The W. border encroaches considerably on the somewhat larger companion, which is, however, scarcely a third so deep. One of the longest clefts on the visible surface runs immediately E. of this formation. Commencing at a minute crater on the N. of it, it grazes the foot of the E. glacis; then, passing a pair of small overlapping craters (resembling Sirsalis and its companion in miniature), it runs through a very rugged country to a ring-plain W. of De Vico (De Vico a), which it traverses, and, still following a southerly course, extends towards Byrgius, in the neighbourhood of which it is apparently lost at a ridge, though Schmidt and Gaudibert have traced it still farther in the same direction. It is at least 300 miles in length, and varies much in width and character, consisting in places of distinct crater-rows.