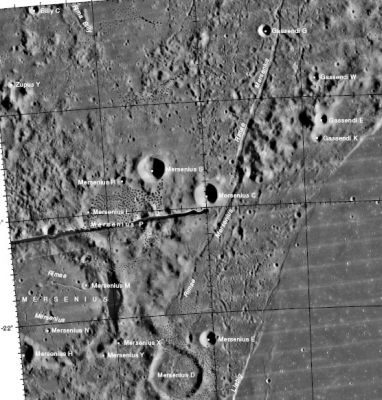 USGS Digital Atlas According to the USGS Digital Atlas current IAU nomenclature extends the traditional system of Mersenius rilles to include the fractures on the floor of Mersenius, but omits the rille on the shore of Mare Humorum known as Rima Mersenius III in the System of Lunar Craters. Prior to the System of Lunar Craters the upper part of the long rille extending out the top of the frame (near Gassendi G) was called Gassendi Ir and the lower part Mersenius Ir.

(IAU Directions) MERSENIUS.--... A fine crater-row traverses the central part of the interior, nearly axially, and a delicate cleft crosses the N. half of the floor from the inner foot of the N.W. wall to a crater not far from the opposite side. I detected another cleft on November 11, 1883, also crossing the N. side of the floor.