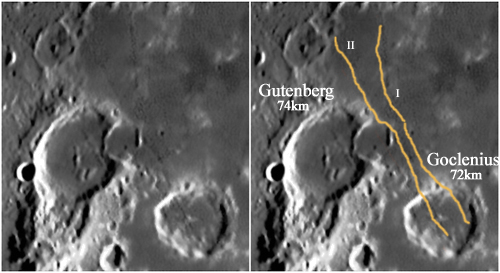 John Moore. Interpretation of the Goclenius rille numbers established in the System of Lunar Craters. The rilles lie midway between Mare Fecunditatis (top right) and Mare Nectaris (bottom left and out of picture). Rima Goclenius II is roughly 200 km in length, ending at the south-eastern rim of Goclenius - its floor being lower than the surrounding mare. Rima Goclenius I is also shown extending across the floor of Goclenius although such an extension has never been part of the IAU definition.

Land of Milk, Honey and Rilles.