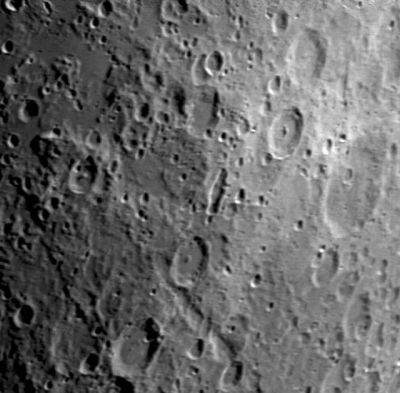 Eric Soucy Rheita is at the lower center, with a central peak. The oblong formation at centre of photograph is Rheita E.

(IAU Directions) RHEITA.--A formation, about 35 miles in diameter, S. of Reichenbach, with regular lofty walls, rising at a peak on the N.W. to a height of more than 14,000 feet above the interior, on which there is a small but prominent central mountain, a smaller elevation E. of the centre, and two adjoining craters at the foot of the S. wall. On the W. originates another fine valley, very similar to that already mentioned in connection with Reichenbach. It runs in a S.S.E. direction, is about 100 miles in length, and, in its widest part, is about 12 miles across. Like the Reichenbach valley, it terminates at a small crater-like object, which has a border broken down on the side facing the valley, and a small central hill. About midway between its extremities, this great gorge is crossed by a wall of rock, like a narrow bridge.

Looking Down the Chain