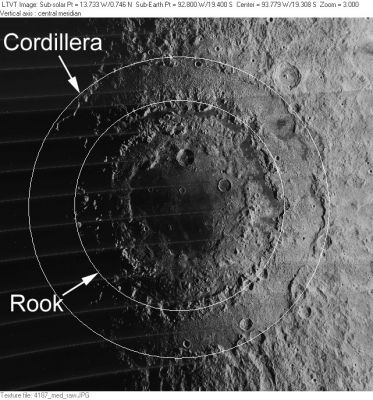 LO-IV-187M The circles superimposed on this [/Lunar%20Orbiter Lunar Orbiter] view indicate what are probably most usually taken to be the IAU's Montes Cordillera and [/Montes%20Rook Montes Rook] ranges around [/Mare%20Orientale Mare Orientale]. [/Montes%20Rook Montes Rook] probably includes the ring of peaks inside the inner circle, a formation known to many lunar geologists as the Inner Rook Ring.


This page has been edited 1 times. The last modification was made by - tychocrater tychocrater on Jun 13, 2009 3:24 pm - afx3u3
Retrieved from "http://the-moon.us/index.php?title=Montes_Cordillera&oldid=1952"
Category: