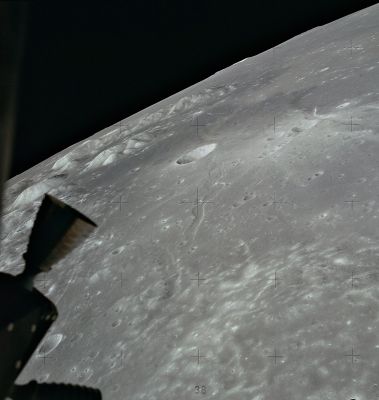 Apollo 15 image AS15-87-11709 In this view looking south from over Mare Serenitatis, Mons Argaeus is at the right-hand end of mountain chain, above the black plus-mark. The "large" crater below Mons Argaeus is the 6-km diameter Clerke with the channels of Rimae Littrow visible in front of it. To the right of Clerke is a chain of craters known to the IAU as Catena Littrow. On the left, the prominent peak touching the tip of the rocket nozzle appears to be the North Massif of the Apollo 17 landing site. Mons Argaeus is actually much larger, but more distant. The 2-km diameter foreground crater (touching the body of the rocket engine in the lower left) is unnamed, but it is on the outer flanks of Littrow, which is just out of the frame to the left.

(IAU Directions) MOUNT ARGAEUS.--There are few objects on the moon's visible surface which afford a more striking and beautiful picture than this mountain and its surrounding heights with their shadows a few hours after sunrise. It attains an altitude of more than 8,000 feet above the Mare, and at a certain phase resembles a bright spear-head or dagger. There is a well- defined rimmed depression abutting on its southern point.