This page follows along the same aims in that of the original Miscellany page and the Miscellany 2 page -- that is, to include occasional images from LPOD that have been annotated to aid in discussion. If you would like to add an image relevant to an LPOD, then please see directions at end of this page for help (it's so simple). Visit also the fourth part of the Miscellany pages: Miscellany 4

The two images below show: (left) two marked regions that may represent massive piles of debris flung from the Imbrium impact; (right) a geological representation of the same area. If both marked piles came from the one souce at, roughly, the same time when the Imbrium basin formed, then why does one pile (bottom-marked pile) look more homogeneous in its topography than to the other (upper-marked pile) which shows a more groove-like appearance? See LPOD 21 Aug 2009 for an explanation. 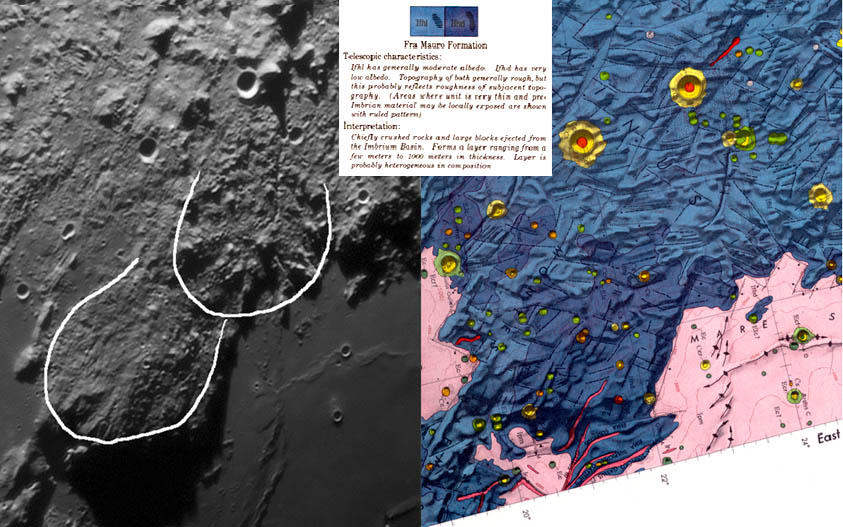 Image (top right) shows a nice peak feature on the near edge of the Moon seen in a larger mosaic image by Stefan Lammel -- a portion of which appears on the 7 Sept 2009 LPOD page. In the discussion's page of the above-mentioned LPOD, a query was posed where the exact location on the lunar surface the peak was related to? Now, thanks to Jim Mosher's direction to where a previous, but seperate discussion about the same feature had already developed, identification of the peak is solved -- clearly seen in the left-most, larger aerial-view image of the region attained by using the LTVT software. Incredible though it may seem, to this observer anyway, one would never have expected the peak in Stefan's image to be so far back, but it is, and it's location has been verified. Bottom-right image shows a portion of the same area from another photo previously taken by Harald Paleske that appeared on 16 Aug 2008 LPOD. As Stefan's and Harald's already-mentioned images show a slight displacement each in libration and view, the very bottom image shows an arranged combination of the two to see if any 3D effect would occur using the cross-eyed technique. For this observer, it works quite well while holding one's view approximately a foot from the screen -- the foreground terrain and Boltzmann show up quite nicely, but the peak is somewhat confusing. 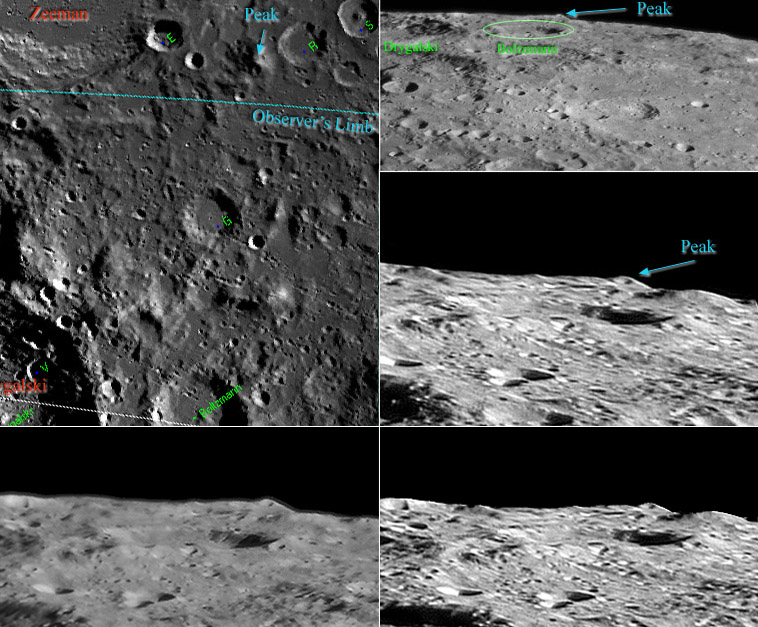 ADDING TEXT & IMAGE TO THIS PAGE


Just like as in the WikiMoon pages all you have to do is:
(1)Click on 'Edit This Page' above,
(2)Place the cursor on the page on where you want the image to appear,
(3)Click the green icon (just left of the blue-looking TV icon) on the top, and click on 'Upload Files' and 'Browse',
(4)Find the image in your own file system on your own computer, and open it,
(5)Clicking on 'Upload' will install a small version of your image, and to insert it all you have to do is do a 'double-click' on it -- you're done....the image appears in the main page!
(6) Add some text, and to finish, just click 'Save'.
If you need to re-edit it later, just go to 'Edit This Page' again. You can experiment around as much as you like, until you're satisfied with the final version. Don't worry, you won't be criticised for your effort or anything like that, but your contribution will certainly be appreciated.
Retrieved from "http://the-moon.us/index.php?title=Miscellany3&oldid=17585"