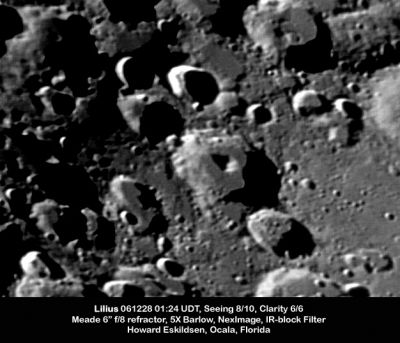 Howard Eskildsen
Lilius is the crater at center of Howard Eskildsen's telescopic photograph.
Note its pronounced central peak, which was once called Lilius Alpha.

(IAU Directions) LILIUS.--An irregular ring-plain, 39 miles in diameter, with a rampart on the W. nearly 10,000 feet above the floor. A smaller ring between it and Jacobi has considerably inflected the wall towards the interior. It has a conspicuous central mountain.