It has been suggested that it would be useful to have a place for occasional images from LPOD that have been annotated to aid in discussion. Let's try it. If we get more than a few images here this page should become a table of contents linking to other pages with images. Note, due to page changes here, another Miscellany2 page has been created which may also relate to links posted in discussions in LPOD. If you would like to add an image and text to this page relevant to an LPOD, then please see directions at end of this page for help (it's so simple). 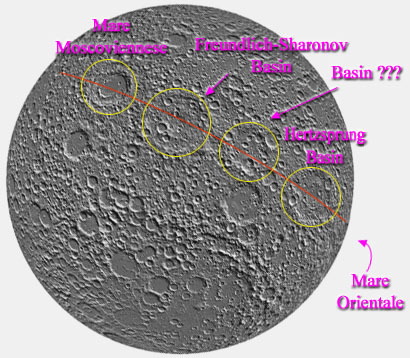 The name Dirichlet-Jackson has been informally proposed for the feature labeled "Basin???" See the Lunar Basins List for unofficial names of other basins visible in this view.

ADDING TEXT & IMAGE TO THIS PAGE
Just like as in the WikiMoon pages all you have to do is:
(1)Click on 'Edit This Page' above,
(2)Place the cursor on the page on where you want the image to appear,
(3)Click the green icon (just left of the blue-looking TV icon) on the top, and click on 'Upload Files' and 'Browse',
(4)Find the image in your own file system on your own computer, and open it,
(5)Clicking on 'Upload' will install a small version of your image, and to insert it all you have to do is do a 'double-click' on it -- you're done....the image appears in the main page!
(6) Add some text, and to finish, just click 'Save'.
If you need to re-edit it later, just go to 'Edit This Page' again. You can experiment around as much as you like, until you're satisfied with the final version. Don't worry, you won't be criticised for your effort or anything like that, but your contribution will certainly be appreciated.
Retrieved from "http://the-moon.us/index.php?title=LPOD_Miscellany&oldid=16177"