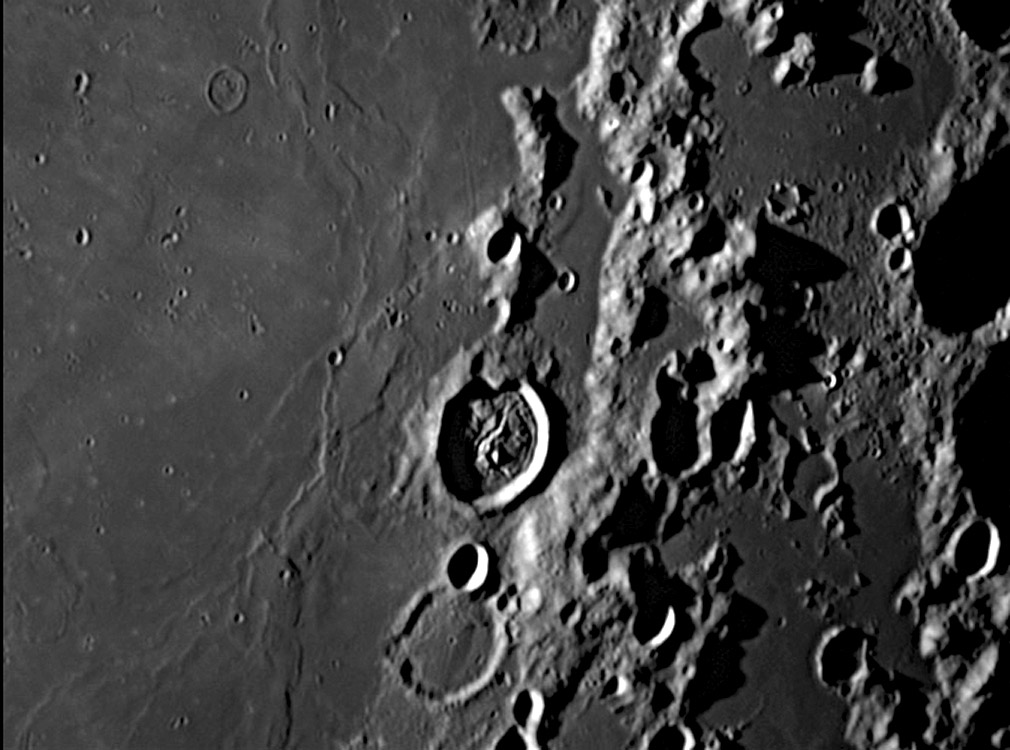 The mare lavas that fill impact basins typically are cut by rilles near their shores. Humorum and Serenitatis are famous examples, but all the main nearside circular basin mare have concentric rilles except for Crisium and Nectaris. Oops, now Nectaris does to, maybe. The center of attention of Bart's image of the eastern side of Mare Nectaris is the floor-fractured crater Bohnenberger. The adjacent Pyrenees Mts are one of the inner rings of the Nectaris Basin, and the lavas east (right) of that fill the moat between rings. But this may be the discovery image for two narrow rilles on the mare just above the simple crater F that sits on a mountain north of the namesake Bohnenberg. The rilles extend about 20 km and then become fainter, diverge and disappear after an additional 15 km. There is a hint that one rille cuts the mountain mass and extends a few kilometers south of F. The rilles are confirmed on Lunar Orbiter IV-65-H2, although it is necessary to enhance the online image to clearly see them. It has been thought that Nectaris does not have circumferential rilles because the maria is too thin to cause subsidence of the basin floor, and bending at the edges that makes the rilles. Bart's small rilles suggests that we should look carefully for any others that may have been overlooked!

Technical Details
Sept 30, 2007, 3:30 UT. C9.25+DMK camera
Note: Having seen the rilles on Bart's image it is possible to faintly detect them on this slightly higher Sun view. Does anyone else have images of them?

(2) John - I don't know how thick a mare has to be to cause subsidence. Fracastorius formed on the sloping northern edge of Mare Nectaris and its southern rim is gone and the crater has been invaded by mare lava. And then the lava cracked, perhaps because of subsidence. There may have been some, but not enough to produce abundant rilles.
Chuck

(3) Chuck - These rilles are maybe clearer in Lunar Orbiter IV-072 (than in the LO photo you reference). It removes any doubt about the right-hand rille (0.6-1.0 km wide) cutting through the hill on the left of Bohnenberger F and extending to the south where, although it peters out, it seems headed in the direction of the similar, but wider, rift (also visible in Bart's image) in the hill on the NW edge of Bohnenberger. As you undoubtedly noticed Bohnenberger A (the older crater below of the floor-fractured one), has a similar-sized and oriented, but probably unrelated, linear groove on its floor (also easily seen in Bart's picture); as well as fine wavy ones similar to some seen in its more picturesque companion to the north.

Using Photoshop to browse around the remainder of Nectaris' shore in LO-IV-072 and in the adjacent panel, LO-IV-077 (which shows the western half of Nectaris at comparable resolution), I don't notice any other circumferential cracks similar to these (although Fracastorius has similar ones on its extreme eastern shore, but circumferential to itself rather than Nectaris). And I don't quite understand your answer to John: is the much more prominent jagged rille that runs E-W across Fracastorius another example of a Nectaris subsidence crack, or is it subsidence within Fracastorius alone?.

In view of the good LO coverage, it seems unlikely Earth-based images are going to reveal more cracks in Nectaris; but Mare Crisium was not as successfully imaged by Lunar Orbiter. Maybe the new space missions will show cracks similar to these in Crisium, and, as you suggest, their closers look will reveal still narrower ones in Nectaris.