Hipparchus (with Horrocks on its floor) 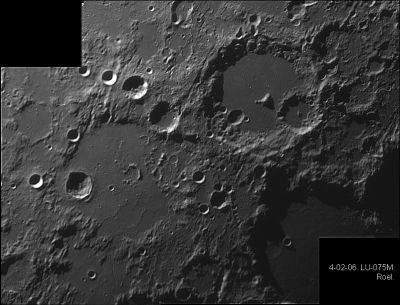 Eric Roel
In this telescopic view, Hipparchus is the large crater at left, with the pronounced crater Horrocks on its floor.
Note also the curved "row of four" just above Hipparchus (craters Halley, Hind, Hipparchus C, Hipparchus L).

(IAU Directions) HIPPARCHUS.--Except under a low sun, this immense walled-plain is by no means so striking an object as a glance at its representation on a chart of the moon would lead one to expect; for the border, in nearly every part of it, bears unmistakable evidence of wreck and ruin, its continuity being interrupted by depressions, transverse valleys, and gaps, and it nowhere attains a great altitude. This imperfect enclosure extends 97 miles from N. to S., and about 88 miles from W. to E., and in shape approximates to that of a rhombus with curved sides. One of the most prominent bright craters on its border is Hipparchus G, on the E. Another, of about the same size, is Hipparchus E, on the N. of Horrocks. On the W. there is a moderately bright crater, Hipparchus F; and S. of this, on the same side, two others, K and I. The interior is crossed by many ridges, and near the centre includes the relics of a low ring, traversed by a narrow rill-like valley. Schmidt shows a cleft running from F across the floor to the S. border.

A Hole in the Middle. On Approach for Landing Drawing Hooke & Hipparchus Double Crossed