Gassendi - and Clarkson (Gassendi A)

Left: Mike Wirths, Right: Apollo 16 submitted by Stefan Lammel
On Mike Wirths's telescopic photograph at left, both Gassendi and Clarkson (Gassendi A) were captured in fine detail. Clarkson was a discontinued name from H.P.Wilkins and P.Moore (see their book The Moon). Although discontinued, the name Clarkson is still printed on the recent version of the Hallwag moonmap, among other discontinued names from Wilkins and Moore.

(IAU Directions) GASSENDI.--One of the most beautiful telescopic objects on the moon's visible surface, and structurally one of the most interesting and suggestive. It is a walled-plain, 55 miles in diameter, of a distinctly polygonal type, the N.E. and S.E. sections being practically straight, while the intermediate E. section exhibits a slightly convex curvature, or bulging in towards the interior. There is also much angularity about the W. side, which is evident at an early stage of sunrise. The wall on the N. is broken through and almost completely wrecked by the great ring- plain Gassendi A. The bright western section of the border is in places very lofty, rising at one peak, N. of the well-known triangular depression upon it, to 9,000 feet, and at other peaks on the same side still higher. It is very low on the S., being only about 500 feet above the surface. The floor, however, on the N. stands 2,000 feet above the Mare Humorum. On the E. there is a peak towering 4,000 feet above the wall, which is here about 5,000 feet above the floor, and 8,000 feet above the Mare Nubium. A very notable feature in connection with this formation is the little bright plain bounding it on the N.E., and separated from it by merely a narrow strip of wall. This enclosure is flanked on the N.W. by Gassendi A, and on the S.E. and N.E. by a coarse winding ridge, running from the E. wall and terminating at a large irregular dusky depression. Gaudibert has detected a crater near the S.W. edge of this bright plain, which includes also some oval mounds. The interior of Gassendi is without question unrivalled for the variety of its details, and, after Plato, has perhaps received more attention from observers than any other object. The bright central mountain, or rather mountains, for it consists of a number of grouped masses crowned by peaks, of which the loftiest is about 4,000 feet, is one of the finest on the moon. It was carefully studied with a 6 1/4 inch Cooke-achromatic by the late Professor Phillips, the geologist, who compared it to the dolomitic or trachytic mountains of the earth. The buttresses and spurs which it throws out give its base a digitated outline, easily seen under suitable illumination. There are between 30 and 40 clefts in the interior, the majority being confined to the S.E. quarter of the floor. Those most easily seen pertain to the group which radiates from the central mountain towards the S.E. wall. They are all more or less difficult objects, requiring exceptionally favourable weather and high powers. A fine mountain range, the Percy Mountains, is connected with the W. flank of Gassendi, extending in a S.W. direction towards Mersenius, and defining the N.W. side of the Mare Humorum.

Gassendi was the most eye-catching formation during the evening of august the 13th, 2016, around 9:00 U.T. (Waxing Gibbous Moon).
Its dark floor, its illuminated central peak, and also the crackled appearance of the partially illuminated western section of its rim were worthwile to observe! At the same moment, the two major peaks of the Montes Harbinger were also illuminated (two bright dots beyond the terminator, see drawing of the Montes Harbinger in Harold Hill's book A Portfolio of Lunar Drawings).
- DannyCaes Aug 13, 2016 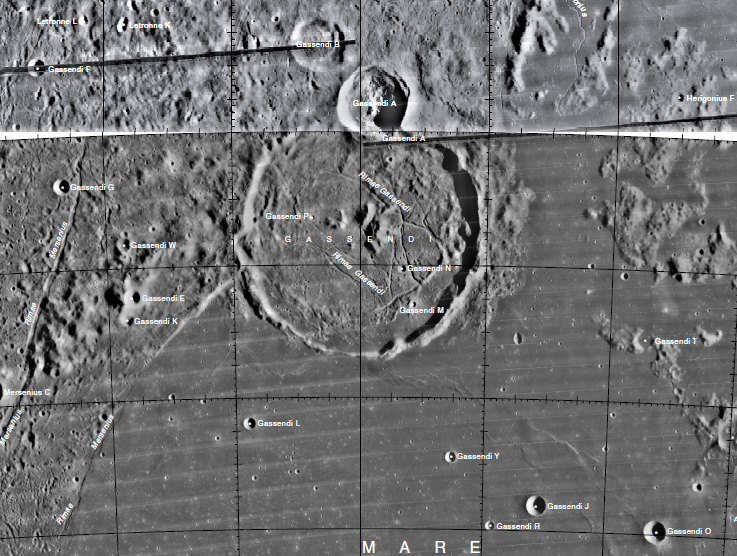 Mosaic of LAC 75 and LAC 93. Excerpt from the USGS Digital Atlas of the Moon.