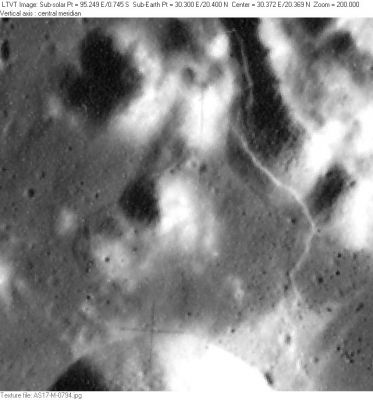 AS17-M-0794 The IAU's Family Mountain is the small bright peak just to the left of center. the complex of higher peaks to its north is North Massif, while the bright arc at the bottom is the north foot of South Massif. The feature known as Scarp produces the bright crack-like streak down the right-hand portion of the image, crossing, at the bottom, the albedo feature known as Light Mantle. The suspected volcanic cinder cone Falcon is the second small dark dot due south of the shadowed west of Family Mountain. Falcon is surrounded by a dark area and then a light halo around that.

LPOD Photo Gallery Lunar Orbiter Images Apollo Images
Mike Constantine's assembled panorama of LMP Harrison "Jack" Schmitt at Station 1. The Family Mountain is just behind Jack Schmitt. The South Massif is at left. The North Massif, the Wessex Cleft, and one of the Sculptured Hills are at right.