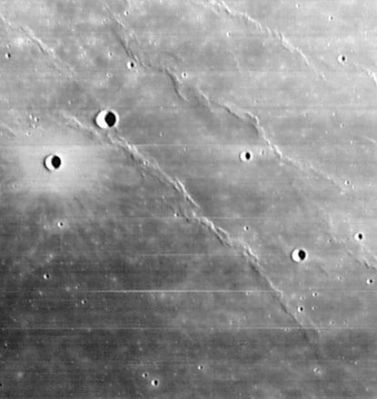 LOIV 163 H1 Dorsum Scilla is the southernmost of the three prominent ridges visible in this image (running up from the lower right corner). The crater with the bright halo is Lichtenberg B, and its slightly larger companion to the northeast is Naumann G. Depending on what map one consults, Dorsum Scilla either terminates at Naumann G, or continues on beyond the upper left corner of the present image, possibly terminating at Naumann (~ 100 km away, and out of image off to the northwest). The two equally prominent ridges, seen in image to the northeast of Dorsum Scilla, are unnamed.