Left: LROC WAC mosaic image (No.s M119827656ME and M119834425ME). Calibrated by LROC_WAC_Previewer.
Right: Mario Weigand This Earth-based view is oriented with sourth up. The 61-km crater in the lower left corner is Curtius D. In the extreme upper right corner, a small part of the sunlit inner wall of Moretus can be seen. The 12-km diameter shadowed crater of Curtius's southwest rim (upper right in the Earth-based view) is Curtius A, while the similarly-sized, but older, one on the east rim is Curtius E.

(IAU Directions) CURTIUS.--A magnificent formation, about 50 miles in diameter, with one of the loftiest ramparts on the visible surface, rising at a mountain mass on the N.W. to more than 22,000 feet, an altitude which is only surpassed by peaks on the walls of Newton and Casatus. There is a bright crater on the S.W. border and another on the E. The formation is too near the S. limb for satisfactory scrutiny. Between Curtius and Zach is a fine group of unnamed enclosures. 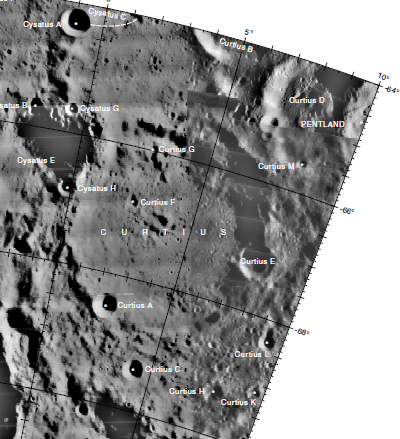 LAC No. 137. Excerpt from the USGS Digital Atlas of the Moon.