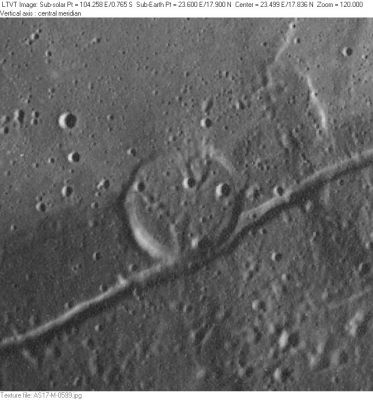 AS17-M-0599 Brackett is the faint, round structure in the center, pocked, like the surrounding mare, by many small, unnamed craters. Although it looks a bit like a cookie, the shadows reveal Brackett has a raised rim giving it a pie-pan like shape with a flat bottom and tapered walls. Note the sharp change in the surface reflectance (albedo) of the surrounding mare from light to the north of Brackett to dark to its south. This is consistently observed over a wide range of sun angles. The rille is part of Rimae Plinius.