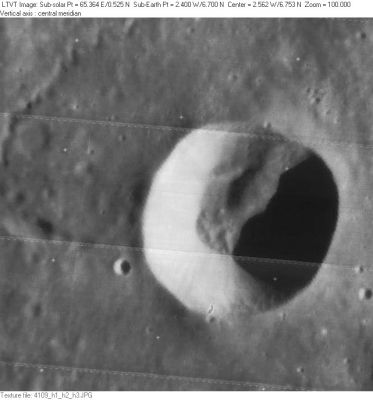 LO-IV-109H A sinuous rille (known as Rima Bode III in the System of Lunar Craters) appears to begin in the unnamed elongated pit near the center left margin, and then winds north across the surrounding mare (visible in upper left corner of this frame).

At the central part of the curved horizon in the southward looking Fairchild camera frame AS15-M-2575.

At the central part of the curved horizon in the northward looking Fairchild camera frame AS16-M-845.

At the central part of the curved horizon in the southward looking Fairchild camera frame AS17-M-2430.
- Research Apollo 15, 16, and 17 photography: Danny Caes

(IAU Directions) BODE.--A brilliant ring-plain, 9 miles in diameter, situated on the N. side of Pallas. Its walls rise about 5,000 feet above the interior, which is considerably depressed, and includes, according to Schmidt and Webb, a mountain or ridge. There are two parallel valleys on the E., which are well worth examination.