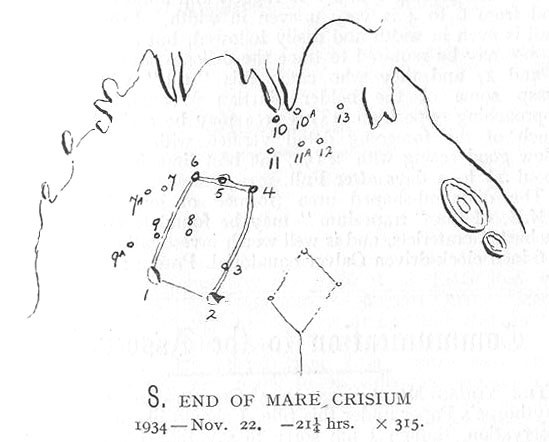 Robert Barker's south-up chart of the Trapezium shaped system of ridges and craterlets (1-2-4-6) that he observed in the southern part of [/Mare%20Crisium Mare Crisium], as published in the the Journal of the [/BAA BAA] in 1935 (courtesy Phil Morgan). Craterlet 1 is the modern [/Fahrenheit Fahrenheit], 2 is presumably [/Picard Picard] Y.

Barker's Quadrangle or the Trapezium is an informal name for a region on the floor of [/Mare%20Crisium Mare Crisium] that was once one of several that inspired speculation about [/LTP changes] on the Moon. The northeast corner of the quadrangle is marked, roughly, by 6.5 km diameter [/Fahrenheit Fahrenheit] and the northwest corner by 4 km [/Picard Picard] Y. The side of the "quadrangle" extending south from [/Fahrenheit Fahrenheit] is marked by a fairly prominent [/dorsum wrinkle ridge] that then trends to the west through a cratered area, creating another side. At least parts of this ridge appear to be regarded as components of the [/Dorsa%20Harker Dorsa Harker] system by the IAU. The remaining parts of the quadrangle are much more vague than Barker's description would suggest. In addition to Barker's original description, UK amateur Phil Morgan has located a number later descriptions of this feature, several of which are reproduced below. - JimMosher JimMosher

This page has been edited 1 times. The last modification was made by - tychocrater tychocrater on Jun 13, 2009 3:24 pm - mfx3
Retrieved from "http://the-moon.us/index.php?title=Barker%27s_Quadrangle&oldid=202"
Category: