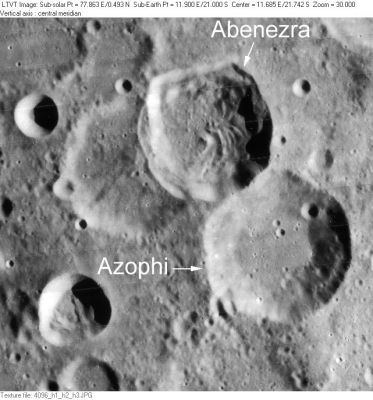 LO-IV-096H The older crater of similar size that Abenezra overlays on the southwest is Abenezra C. The field includes Azophi and a tiny part of the southwest rim of Geber is visible in the upper right corner.

(IAU Directions) ABENEZRA.--When observed near the morning terminator, this noteworthy ring-plain, 27 miles in diameter, seems to be divided into two by a curved ridge which traverses the formation from N. to S., and extends beyond its limits. The irregular border rises on the E. to a height of more than 14,000 feet above the deeply-sunken floor, which includes several craters, hills, and ridges.